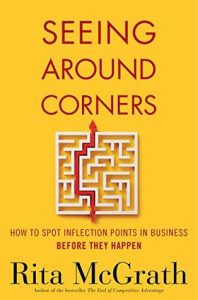 Seeing Around Corners is a fantastic and easy read for those looking at Digital/Agile transformations, about reorganising the way your teams think and act. Using data to make decisions and acting vs holding off, different types of indicators to signal reflection points. A concept called Jobs To Be Done that I was introduced to when helping built the team for Namecheap’s EasyWP comes up often, always ensure you fully understand what your customers are using your products for.

What Rita has written aligns nicely with Agile ways of thinking and working that we love to promote.

Ensure that there is an open, consistent and continual feedback loop from the edges of your business, where your customers interact. Some of the best leaders I have worked with open their inbox to customers, sit in on livechat/phone calls. Put yourself in your customers shoes:

“If snow melts from the edges, it behooves you to have mechanisms in place to see what is going on there.”

“A very common reason that leaders miss potentially important inflection points is that they are isolated from the people who could tell them what is really going on. By closing themselves off from critical communication with people who may disagree or who may have different vantage points, such leaders develop a false sense of what is going on in the world.”

Strategy creation and optimisation/adjustment needs input data, its no longer a gut decision or following the market:

“Given the pace and speed of change, strategy creation is no longer an activity that is confined to the executive team. Rather, it is an effort to galvanize the entire organization to act around a common point of view about the future.”

Not all decisions are equal, some are reversible, empower people to identify which decisions can be changed and give them autonomy to act – as Netflix do, decentralise thinking/acting:

“Amazon founder and CEO Jeff Bezos has famously observed that there are two basic decisions that an organization needs to make. What he calls type 1 decisions are those that have huge implications for the organization, are potentially highly risky, and are irreversible. Type 2 decisions, in contrast, are reversible, low risk, and rich in learning potential.”

“One principle is that teams should be small and empowered to make decisions about low-risk activities under their control.”

“It hasn’t happened yet, but I believe the most successful quarter I could have as CEO is one where I don’t make a single decision”
Reed Hastings (Netflix CEO) from his book “No Rules Rules“:

Mark Randall from Adobe wanted to get feedback so he did exactly that, talked directly with people all over Adobe and invented the Kickbox:

“He used a best practice for getting insight from the edges—in this case, interviewing dozens of employees to find out what obstacles were in the way of their pursuing promising ideas based on insights that they might uniquely have about customers and next steps.”

Remove anything that might prohibit ideas from team members sharing ideas:

“Often, the big problem was not coming up with interesting ideas. The problem was fighting one’s way through the bureaucracy to get the approvals necessary to move forward.”

Rita points out a growing trend in looking at some of softer skills vs certification, I for one have always been a supporter of hiring someone with a growth mindset vs the highest qualified person with a fixed mindset:

“Evidence from a LinkedIn insiders’ survey of knowledgeable learning and development specialists shows a softening of the traditional model. Sixty percent of those surveyed believed that employers are well on their way to skills-based-hiring—in other words, “choosing candidates based on what they can do, rather than degree or pedigree.”

“Huge amounts of human breath have been wasted in meetings where people argue back and forth about being right. Instead, think of a low-cost, creative way to determine how you might find out what the right answer really is.”

Through removing the desire to be right, promoting collaboration and experimentation mindsets we have seen teams significantly improve:

“Decision-makers establish projections based on assumptions. As information starts to come back about the consequences of those decisions, assumptions are sometimes shown to be incorrect. And yet, having invested personal capital and often organizational capital in promoting a given point of view, decision-makers escalate their commitment, becoming even more committed to the same ideas. This train wreck proceeds until it becomes obvious that the project is never going to work and someone finally has the courage to pull the plug on it.”

“Unfortunately, for those of us seeking to learn from these failed experiments, in most cases the topic instantly becomes undiscussable, the players who were involved in it disappear, and everybody remaining pretends that it never happened.”

“People in the grasp of a fixed mindset spend a lot of time being excellent, proving how good they are, and seeking to be right. People who approach problems with a “growth mindset,” in contrast, are focused on learning, on keeping an open mind toward new information, and are less concerned with being good than with getting better.”

Your assumption may be wrong. You may have trusted your gut and ignored data. Or had the wrong data to begin with. Getting feedback fast allows you to make adjustments, iterate, test:

“With a discovery-driven mindset, value is created all along the development cycle, not just realized at the end.”

Focus – Limiting the amount of “work in progress” can have major upsides:

“It’s always better to do two or three things completely right than do a half-assed job at eight.”